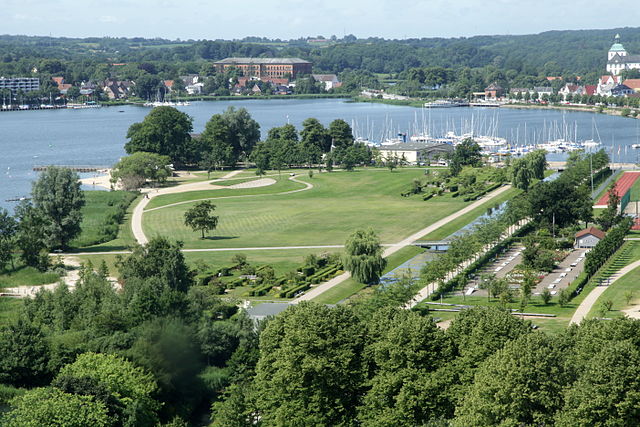 The Kings Meadows is an approx. 16ha (ca. 22 european football fields) big park in the heart of Schleswig and directly located at bank of the Schlei-Firth. It is assumed the the name was given by the danish King Svend Grathe, who gifted it to the city in the 12th century. The area has been comepletely reconditioned back in 2008 because of the state’s first official exhibition of gardens. Afterwards, the norhern part has been reconstructed to a housing estate (called “Stadtpark Königswiesen”). The southern park, which is at the bank, is still a public park. Main elements of the park are the 420m long canal, an Open Air stage, a 14m high lookout tower, a huge Viking themed children’s playground and the public bath called “Louisenbad”. The park provides also a great overview on a little isle, the “Seagull-Isle” (Möveninsel) which is just populated by birds; the cathedral, Haddeby (so called Haithabu, the Viking village) and the Viking-Tower. With the reconditioning of the area it has been considered to build the required infrastructure for bigger events. Those are the best requirements for popular events, like the Viking Days or the Nordic Arts Festival (“NORDEN”)…. And of course for our event “Bei die Wikingers”.